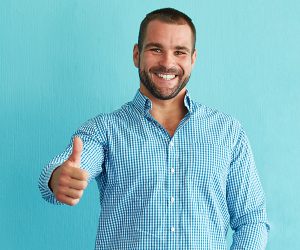 PrEP stands for Pre-Exposure Prophylaxis and is the name for medication taken by people who are at high risk of acquiring Human Immunodeficiency Virus (HIV). It is an antiretroviral medication which means it targets the genetic material of HIV and stops it from reproducing. It is also a combination drug which means it has two active ingredients in the one medication, they are tenofovir and emtricitabine (also known by the trade name, Truvada).

Who should take PrEP?

PrEP is recommend for daily use by anyone who is at high risk of acquiring HIV. This includes all men who have sex with men (MSM), gay and most bisexual men because as a group MSM have a risk of HIV that is almost 20 times higher than the general population. Anyone who is having regular unprotected sex (sex without condoms) with partners of unknown HIV status however should think about using PrEP. For gay and bisexual men (and other MSM) PrEP should be used continuously and used together with condoms.

How effective is PrEP?

PrEP needs to be taken for 7 days straight to be sure that it will be 99% effective so it is recommend to take PrEP for 7 days before engaging in high risk sexual activity.

How much does it cost?

PrEP obtained via a chemist with a doctor’s prescription is very expensive (about $800/month or $10,000/year). It is much more affordable when obtained from well established online pharmacies where it between $50-100/month). There are also research studies being conducted across most states in Australia that allow you to access PrEP for free and in exchange you can contribute to furthering our understanding of HIV prevention.

Are there any side effects?

In general PrEP is very well tolerated, most people will not notice any side effects but they will probably experience a small decline in their kidney function that and a reversible and very small loss of bone strength.

Do I need to see a doctor?

Anyone who is using PrEP should consult with a doctor experienced in HIV and sexual health. People who are taking PrEP need baseline testing of their kidney function and testing to make sure they do not already have HIV. They also need testing to diagnose and treat other sexually transmitted infections like chlamydia, gonorrhoea and syphilis. They can also answer any other questions of sexual health.

What should I expect when I go to see the doctor?

Expect to be asked about your sexual practices, what immunisations you have or haven’t had and about your general medical history. The doctor will explain what PrEP is, the benefits and risks of using PrEP as well as other strategies to reduce your risk of acquiring sexually transmitted infections. They will order a baseline HIV test and kidney function test and test for other sexually transmitted infections that you might have but not know about. They will advise you to get repeat testing every 3 months to monitor your kidney function and to check your HIV status while you’re taking PrEP.

The cheapest and easiest way to access PrEP is through the demonstration research trials being performed across most states in Australia. There is no cost for the medication this way and you can access these trials through consulting with Health for Men and Dr. Matthew Barber.

PrEP is also easy to access online and much more affordable than obtaining it from a chemist in Australia. After obtaining a prescription from your doctor who is trained in prescribing this sort of medication you can visit pan.org.au to find reputable online suppliers of PrEP and their prices. The easiest (and cheapest) option is to obtain PrEP through one of the research studies occurring in many states in Australia where it is free. There is more information available on this at www.comeprepd.info